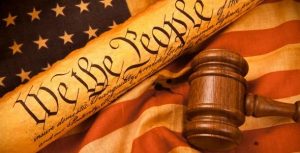 The American war of Independence was an act of national and class revolutionary violence against aristocratic/monopolist merchant class in Britain by colonial American merchants farmers and craftsmen. An expression of advanced thought at that time is to be found in Common Sense by Tom Paine.The American Declaration of Independence and the Constitution recognise the equality of man or actually that of property owners. This Constitution was used by slave owners and then by Abolitionists. It has been used to bolster aggressive expansion at expense of native American peoples and Mexicans. Then to support US domineering policy in the so called “backyard”, the Caribbean, Latin America and, later, the world.The constitution was used to pursue segregation and by the Civil Rights movement, by the American Labour Movement and corporate giants. The powerful imperialist capitalist elite have usually won the day.

A History of the American War of Independence

Perspective on the US Constitution
http://www.nyu.edu/projects/ollman/docs/us_constitution.php

Ukrainian ambassador to Germany whitewashes Bandera's crimes & ignores his collaboration with the Nazis. In Britain much of the media & most parliamentary politicians also revise history to their ends. Many who stigmatised Corbyn remain silent on Nazis in Ukraine.

US is a country where violence in is endemic. It has unleashed wars against countries throughout the world, its culture glorifies killing, whether by serial killers, police or security operatives. Children learn games where the aim is to kill or maim.
https://morningstaronline.co.uk/article/f/most-violent-country-earth

Keir Starmer has worked out that if Labour goes on about getting back in the EU, single market or customs union, Labour will lose badly; he'll be out of a job. Yet there are still those in Labour whose first loyalty is to Brussels.
https://www.telegraph.co.uk/politics/2022/07/04/sir-keir-starmer-clashes-labour-brexit/