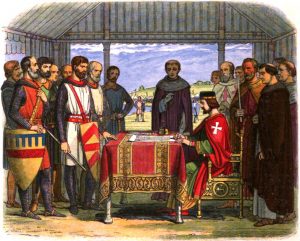 There is a range of documents from before and after the Civil War that are considered fundamental to Britain’s constitutional history. We should acquaint ourselves with the structures and processes involved in British Constitutional life. Where does the constitution derive from historically and on a day to day (more year or decade) basis? The ideas of the rule of law, supremacy of parliament, parliamentary privilege… are somewhat mythical, but have practical implications.

The role of the monarch, the cabinet and ministers change frequently, sometimes with regular effect on current affairs. The power of the police in dealing with protest and maintaining public order, as well as a range of legal-administrative issues e.g. judicial review, come to the fore in a study of the unwritten constitution. -Important issues must be looked at under other sections or in other forums, including the role of the EU and devolution.

Included are links to some of the most important documents of our constitutional history. We will however be studying the Bill of Rights of 1688.

International background to the Glorious Revolution

The unspoken constitution bringing things up to 2009, there have been many changes since.

GMB express concern over jobs of 146,000 staff; as Walmart sell Asda to billionaire Issa brothers & a private equity company. Asda is priced at £6.8 billion, Walmart will still hold a minority stake; £4b is to be borrowed.
https://www.theguardian.com/business/2020/oct/02/asda-sold-to-billionaire-issa-brothers