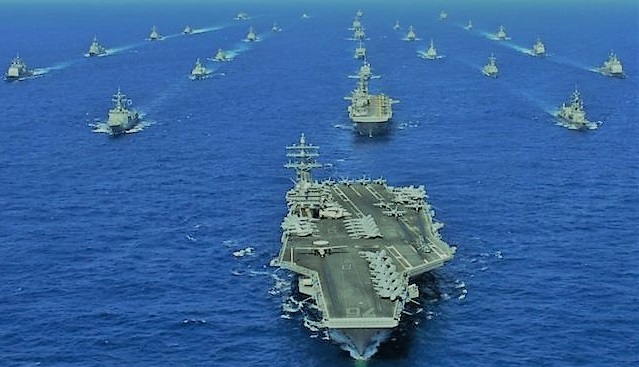 For a President who initially promised an ‘America First’ policy during his election campaigning, Trump has shown that US Imperialism is alive and well.

Examples include his threat to withdraw from the nuclear agreement with Iran, the continued interference in Venezuela, where a desire to get American hands on their oil reserves is a key motivation, his recent promise to put more troops in Afghanistan and his aggressive threats towards North Korea.

North Korea understands only too well the dangers from the US. Painted as a paranoid, evil country by the western press it is worth remembering what the US did to it during the Korean war. By the time of the armistice in July 1953 there had been an estimated 1.3 million military and civilian Korean casualties out of a population of about 9.6 million before the war. Its entire infrastructure, including the greater part of its towns and cities, had been obliterated.

Much of the destruction was caused by aerial bombardment. The US Air Force dropped 635,000 tons of explosives, more than the entire Pacific Theatre of WW2, including 32,000 tons of napalm.

Not surprisingly North Korea prioritises national defence in its constitution, having a policy of ‘songun’ or ‘military first’. They understand only too well that even countries which give up their nuclear ambitions, like Libya, will still be attacked. For this reason they consider their nuclear programme to be a defence ‘in the present world where the law of the jungle prevails’ (statement by the North Korean Foreign Ministry).

Igniting flares of smoke and waving flags, the demonstrators are demanding better pay, better protections, and better resources for a safer working environment.

In socialist China there has been a successful Targeted Poverty Alleviation program, one of the three guaranteed is safe housing, which after a mass mobilisation of Communist Party members has been achieved throughout the country
https://thetricontinental.org/studies-1-socialist-construction/

In Britain homelessness is expected to soar as Covid measured are ended. The idea of affordable homes has been a pious hope, but now safe homes will be beyond the means of increasing numbers of working people.
https://www.theguardian.com/business/2021/oct/17/thousands-of-affordable-uk-homes-wont-be-built-because-of-safety-crisis

GMB members #Brightonbinworkers strike, against sudden changes in shifts & culture of bullying, has gone on for two weeks. The Green council's intransigence has led to health risks as rubbish piles up. Green's Tory allies have accused workers of Terrorism
https://www.theargus.co.uk/news/19652456.brighton-bin-strike-we-ready-settle---gmb/