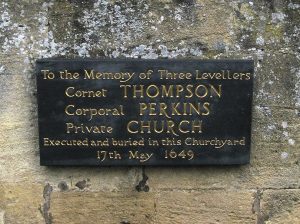 The period of the civil war affected the various nations of Britain and Ireland; it was one in which positions polarised as different classes came to the fore.

Initially the large land owning aristocracy, conservative with links to the monarchy fought the big trading bourgeoisie and sections of the aristocracy and big landowners linked to them then the minor gentry, yeomen, free-trade bourgeoisie, who were supported by the smaller peasants and artisans took the leading role as the New Model Army was created in the heat of battle and Cromwell took control.

The struggle before and after the end of hostilities, became between the bourgeoisie/gentry and artisans/peasants. It took the form of the army agitators, Levellers, Putney debates, the Agreement of the People and finally Burford.The Agreement contains rights that have taken centuries to secure. Some that make sense to workers still have not been obtained. In reality a parliament that speaks for the majority of the people has not been won yet.If we read the Covenant and see through the religious rhetoric, then we see demands: democracy, education, freedom of thought; but with strict boundaries. (If we let a thousand flowers bloom; we don’t want rank weeds.)The Agreement is framed in secular language of the struggle of classes. After Burford and especially after the restoration, thought about and practice of struggle was framed in religious terms – ranting quakerism gave way to quietism of later dissenters.

The Solemn League and Covenant 1643

Agreement of the people 1649