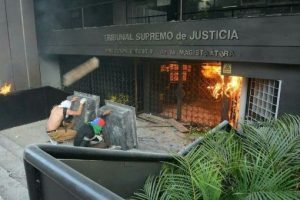 Having failed to oust the government electorally and with their economic sabotage exposed, the fascist oligarchy has relied on violence in the hope of provoking civil war, giving the US an opening for military invasion to assist the fascists into power under the pretext of ‘saving Venezuela’. Their ‘demonstrations’ and violence occur in less than 5% of the country but they rely on the western media to create the impression of crisis and chaos.

The violence has increased from the ‘guarimbas’ (blocking of roads with wires to decapitate motorcyclists), burning barricades and hurling projectiles at police, to the assassination of Chavista activists by hired killers and attacks on public buildings, including health centres. On 20th April 2017 for example, opposition terrorists attacked the Hugo Chavez maternity hospital in Caracas with stones and Molotov cocktails with patients and health workers inside who had to be evacuated. On 21st  April they attacked the El Valle maternity hospital. UNICEF condemned the attacks which our media kept silent about.

The Supreme Tribunal of Justice was attacked several times between the 4th and 8th of April, including an attempt at arson. On the 5th May 2017 they tried to set a petrol tanker lorry on fire on the motorway. A public bus with passengers aboard was stoned and petrol bombed. In that period 43 young people and children, seen as Chavista supporters, were killed by ‘opposition’ terrorists.

US officials and the western media have characterised the election of the Constitutional Assembly as a ‘power grab’ by Maduro designed to abolish the National Assembly. In fact, such abolition is outside the power of the CA or the president and the CA’s committees which are leading economic reforms include members of the NA. Trump has threatened ‘military options’ and increased the economic sanctions started by Obama. But this economic warfare and threatened military attacks have in fact backfired. Even right wing Latin American politicians have rejected US military intervention. 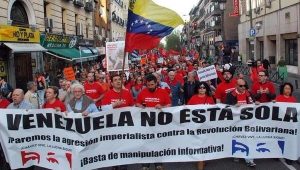 While the executive led by President Maduro has been leading the fight against destabilisation, the people and progressive forces needed a democratic forum to discuss the changes required to the economy and to carry out peaceful dialogue with genuine critics and patriotic opposition parties and politicians. The call for dialogue was supported by, amongst others, the Pope and by the Latin American international bodies UNASUR, CELAC and ALBA.

The election of the Constituent Assembly in Venezuela and its work in tackling current economic and political problems has been an important blow against the right wing fascist opposition and its US backers. For a time, economic difficulties in the country caused by the drastic drop in the price of oil and economic sabotage by the ‘Oligarchy’ or economic conservative elite, decreased support for the government. As a result, the opposition won a majority in the National Assembly (NA) and used this to try to overthrow the elected government, worsening economic problems without presenting a positive alternative. Having been discredited and facing electoral humiliation, they boycotted the elections to the new Constituent Assembly (CA). 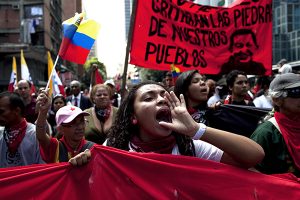 The Venezuelan economy is quite developed, producing, for example, steel from its own resources in iron ore and coal, but it is over-dependent on oil. Its GDP is about a seventh of the UK’s with half Britain’s population and is made up of 50% oil products, 15% manufacture, 3% agriculture and the rest in services and other sectors. Oil products make up 95% of its exports and produce 50% of the government’s revenue.

Chavez and the current government appreciated that over-dependence on oil have to change through a strategy of ‘economic diversification’. The huge progress in social investment particularly health, education and housing has made the fall in government revenues more critical and the need for change urgent. The programme of work of the CA reflects this with plans to increase manufacturing, agriculture and export of non-oil products. The structures for Latin American economic cooperation created by ALBA will help.

There are shortages of consumer goods but food, health, education and housing continue to be provided for the people even if the wealthy endure inconveniences. As Maduro put it, ‘The people’s government is standing and will not allow the Oligarchy or US imperialism to take Venezuela’. Britons must stand with Venezuela.