Venezuela – You Are Not Alone! 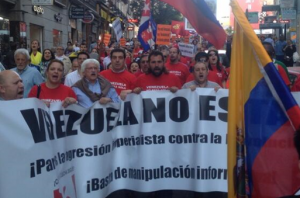 A packed meeting in London on 1st April heard an eyewitness account by Ewan Robertson, a journalist who lives in Merida in Venezuela, where violent protests by opposition activists and hired Colombian mercenaries have taken place.

The violent protests take the form of erecting ‘Guarimbas’ or barricades across roads to deny access to the public areas including health centres. The barricades consist of tyres and vandalised street furniture to which they add rubbish, which is set alight to create smoke. Wires have also been placed across roads, which have decapitated motorcyclists, snipers have shot civilians and police and stones and Molotov cocktails have also been used.

There have also been relatively peaceful protests by students from private universities and by people in wealthier areas of Merida, Caracas and a few other towns, although these are often infiltrated by violent protesters, with the intent to draw repression from the security forces. The numbers are low, in the tens of thousands at most and very much restricted to the wealthier sectors of society.

The protests are ostensibly against the high crime rate and inflation but the purpose is to overthrow the elected government as their slogan ‘La Salida’ meaning ‘the ousting’ demonstrates. The violence and demonstrations started when the opposition to the government divided, as Capriles, the then leader, and his supporters started talking with the government and jointly developing a successful strategy and tactics to fight crime.

It also followed the failure by the opposition to get electoral success. The Chavistas had won 5 elections at all levels with increasing majorities. After the death of Chavez, Maduro was elected with a small majority, 51% of the vote, so the opposition, with US backing and incitement, launched a campaign of economic sabotage, creating food shortages with the plan of winning the municipal elections. The food sabotage was beaten by government control and Chavista candidates won the municipal elections with a 10% increase. It was this that decided a part of the opposition to adopt violence and demonstrations.

While the opposition tactics, particularly the violence, has in fact decreased their support, it has caused 40 deaths, injured many people and has cost $10 billion of economic damage, particularly to public facilities and road furniture. The tactics, which are similar to those that led to the Pinochet coup in Chile, have rallied the Latin Americans in support of the Venezuelan government and people. The Union of South American States (UNASUR) met in Caracas to show solidarity and called on the opposition to cease violence and join with the government’s movement for peace. CELAC, the union of all American and Caribbean States, excluding the US and Canada, have supported the Chavistas as have the ALBA countries.

Even the Organisation of American States have supported the Chavistas, with only the US and Canada voting against, despite being addressed by the opposition leader Maria Corina Machado, acting as the ambassador for Panama. This last stunt, which is against the Venezuelan constitution, resulted in her loss of her position as senator. The Spanish people too have demonstrated in solidarity (see picture) which is valued by the Venezuelan people, their army and government.

To listen to the meeting and find out more see the links: