TTIP comes under more fire. But anger misses the point – TTIP is wrong full stop even with NHS exemption.

A leaked draft of what the European Union wants excluded from a new trade deal with the United States has been obtained by the BBC. The document describes itself as the EU’s “initial offer” in negotiations over the Transatlantic Trade and Investment Partnership (TTIP).

It includes the wording that UK ministers have said will protect the NHS from privatisation. Anti-TTIP campaigners say a specific exemption for the NHS is still needed.

The 103-page document is headed “Trade In Services And Investment: Schedule Of Specific Commitments And Reservations”.

It was produced before the most recent round of TTIP negotiations in Brussels were held at the beginning of this month.

On health, the document states: “The EU reserves the right to adopt or maintain any measure with regard to the provision of all health services which receive public funding or State support in any form”. The wording is the same as that used in a similar free trade agreement between the EU and Canada (CETA).

The UK trade minister, Lord Livingston, said last week that this text ensured “publicly funded health services are excluded”. The European Commission has also previously said TTIP would not affect how NHS services are provided, whether in Scotland or the rest of the UK.

But Scotland’s first minister, Nicola Sturgeon, has called for the NHS to be specifically excluded from the deal. She said: “I think this issue has to be put beyond any doubt. Our NHS is not for sale and TTIP must have a clear and explicit exclusion for the National Health Service.”

The trade union Unite said “real risks” remained because of the dispute resolution mechanism TTIP is expected to include. The union’s Scottish regional secretary, Pat Rafferty said: “Last week Lord Livingston tried to pull the wool over the eyes of the Scottish people. Now this leaked document has confirmed Unite’s expert legal advice, that NHS services in Scotland and the rest of the UK do fall within the scope of the TTIP. This means that American investors in NHS services that are privatised now or in the future will be able to use TTIP to sue the government if it tries to bring them back into public hands”. 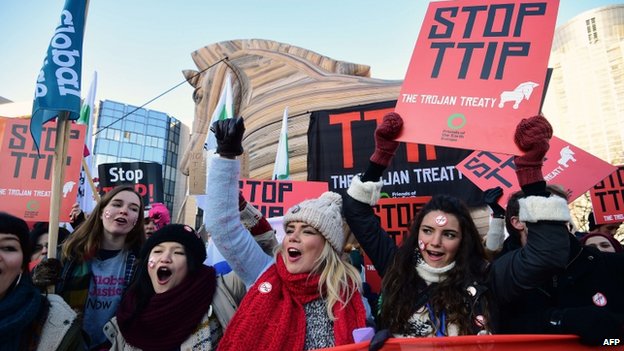 Protests were held outside the most recent round of TTIP talks in Brussels earlier this month. Labour and the Scottish Greens have also endorsed Unite’s campaign. Ian Murray, who is Labour’s Shadow Trade Minister, said: “The EU Commission and Conservative government have been dragged kicking and screaming by the public to exclude the NHS and public services from TTIP. If they are so confident that the NHS is protected then why don’t they specifically add it to the list of exclusions? By not doing so Scots will be suspicious that TTIP could threaten our NHS and other public services.”

BMA council chairman Dr Mark Porter said: “Both the UK government and the European Commission need to ensure that sufficient safeguards will be in place to protect the NHS from further commercialisation arising from the EU/US trade partnership.” In response, European Commission spokesman, Daniel Rosario said: “No existing free trade agreement would prevent any government from renationalising any public services on national or local level. Alternatively, negotiations do not force governments to privatise or deregulate. This situation will not change with TTIP or any other trade agreement. The EU is currently negotiating and the countries that sign up to free trade agreements can keep public monopolies and regulate public services as they see fit.”

Appearing before a Scottish Parliament committee last week, Lord Livingston said he was worried the NHS was being used as a “political football”. He said: “Some people are getting fearful, largely because there are people going around saying ‘the Tories are going to sell off the health service to Americans. We are saying ‘no, it is not true’. The operation of the health services will not be affected by TTIP. The decisions about how they are operated will continue to be that for the democratically elected government of the individual area.”

Lord Livingston also highlighted a letter from EU trade commissioner Cecilia Malmstrom, which offers similar assurances. She said: “There is no reason to fear either for the NHS as it stands today or for changes to the NHS in future, as a result of TTIP.”

The EU document lists reservations from TTIP proposed by the EU as a whole and by individual member states. It makes clear that “where appropriate” member states can seek opt-outs on behalf of parts of their territory. In the EU-Canada agreement, Belgium did this in relation to the issuing of taxi licences in the Flemish, Walloon and Brussels capital regions.

That could prompt calls for the UK government to seek a specific exemption for NHS Scotland, even if it chooses not to do so for the NHS more generally.