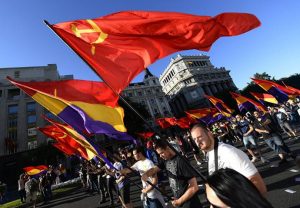 Spanish people demonstrate in
Madrid to demand a referendum
on the monarchy.

They hold flags of 2nd Spanish
Republic and Communist flags.

Demonstrations in 50 cities in Spain on June 7th saw demands for a referendum on the monarchy.

This follows the abdication of King Juan Carlos in favour of his son Felipe, to try to restore the battered reputation of the monarchy. This  followed several corruption scandals and the austerity imposed by the Spanish government who wanted to use public money to save the speculative bankrupt Spanish banks. The king’s son-in-law and his companies are the focus of a fraud investigation involving millions in public money. The governing right-wing Popular party and the centrist Socialist opposition party are overwhelmingly in favour of keeping the monarchy. People shouted ‘Dear Felipe, no one has chosen you’ and ‘Referendum now!’

I hate when people say “the West is inherently reactionary, we can’t organise workers in the imperial core” out of some perceived act of solidarity with the global south. As if people in those countries benefit from us completely abandoning a workers movement on our own soil.

It is hard to understand, till we see things in terms of what side we choose in the class war; the consistency & determination we have in pursuing the interests of our class; and who owns the main source of information/ misinformation.
#HandsofCuba
#EndTheEmbargo

I do not understand how people can look at Cuba with universal healthcare, free education, the lowest infant mortality rate in Latin America, producing vaccines for lung cancer etc. And think, out of every country in the world this is the government people need to be freed from ?

The RMT call for safety, national unity on Covid policy and to prevent violence to rail staff. https://www.rmt.org.uk/news/rmt-warns-of-threat-of-violence-to-staff/

https://youtu.be/9XEnTxlBuGo
"Which side are you on" by Pete Seeger seems appropriate.

My position is simple: support Cuba 100% or shut up.

The choice is socialism or fascism. Pick a side!

The revolution defends itself.

Weird these much larger protests didn't get NYT headlines or statements of support from Biden https://twitter.com/KawsachunNews/status/1414382277363224578