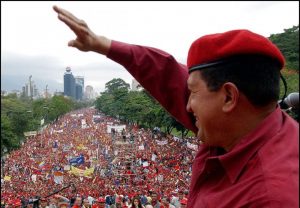 Hugo Rafael Chavez Frias, or Comandante Chavez as millions of his comrades affectionately knew him, died on March 5 following a two-year battle against cancer.

Chavez had become one of the world’s most influential leaders. He launched the “Bolivarian Revolution,” named after Simon Bolivar, the 19th-century independence hero who had liberated Venezuela and other countries from Spanish rule. Inspired by Bolivar, Chavez dedicated himself to liberating contemporary Venezuela and Latin America from the insidious and rapacious doctrines of neoliberalism and imperialism. At a time of political mediocrity and democratic crisis in Europe and the United States, Hugo Chavez stood out as a colossus of independent thought, socialist principle and tremendous courage.

Since the earliest days of his presidency most of the reports about him have been vicious and heavily influenced by the US state department and related agencies. The impression they spent millions of dollars manufacturing was that of a socialist dictator seizing power through lies, fiery rhetoric and military muscle, and a country suffering the dire consequences.  Corporate hack Rory Carroll unwittingly highlights that Hugo Chavez “won free (if not always fair) elections”.  Since Chavez came to power in 1998 US agencies have advised, assisted and funded anti-Chavez groups to the tune of almost 500 million dollars. During the 2012 presidential election alone the US transferred $20 million to Chavez’ opponents. It is quite remarkable that against this political landscape he won elections so overwhelmingly.

The political party of the Bolivarian revolution, the Partido Socialista Unido de Venezuela (PSUV), was formed by Chavez. He made clear this party should be the political organisation that drives forward the revolution. It should bring together all revolutionary militants, in every community, factory, barrio, town, and city. When I interviewed Venezuelan trade unionist and Chavez ally Carlos Lopez last December, he agreed that the PSUV through the political nous of Chavez had “helped hold the old disparate elements of the left together”. It seems to be a shrewd tactic as history shows all too painfully that the left has no limit in its capacity to devour itself and it’s causes. Without doubt Chavez’ PSUV is the most supported party in Venezuela and always carries the highest amount of votes in all the elections. Within 30 days there will be elections in which Chavez’s Vice President Nicolas Maduro will almost certainly win against an opposition that only seems to unite for the purposes of an election and then rapidly falls apart. While nothing is a fait acompli, Chavistas all over Venezuela will tell you that they will not take ni un paso atras, a single step back. Moreover, inspired by the spirit of Dolores Ibbarruri’s Spainsh civil war cry no pasaran, Chavistas vow no volveran, the rich shall not return. And they mean it.

Far from having the characteristics of a “dictatorship” as many on the right expound, Venezuela today is embarking on the most democratic form of governance in 500 years. It is almost certain Chavez’s Plan of the Nation for 2013- 2019 will be continued by Maduro. This was a key part of Chavez’ 2012 presidential election campaign which Chavez opened up to every Venezuelan for debate and improvement. It is a national policy program underpinned by openness and transparency. One of the key mechanisms for participation is public assemblies or “Cities of Debate” as they are known locally, and these meet regularly around different issues. The Socialist Plan isn’t going to be made inside Miraflores presidential palace Chavez always made clear. “It’s growing with grassroots participation right across the country. This is the grassroots that will take Maduro to power.

As a former bus driver and trade unionist Maduro will support the important labour law recently signed by Chavez. It is based on social justice and solidarity, the “untouchableness” of worker rights and benefits, and fresh anti-discrimination laws all underwent a process of wide consultation. In what is considered a big victory for the working class in Venezuela, the new labour law will see the working week reduced to 40 hours and maternity leave increased to 6.5 months. Carlos Lopez – a signatory to the new law along with Chavez – proudly told me that “the law also seeks to eliminate private sub-contracted labour in Venezuela” – which both Carlos and Chavez describe as the exploitative practice of neo-liberal politics.

This law enshrining economic and social justice that Chavez has left for Venezuelan workers comes, ironically, at a time when workers rights are being ripped up across Europe and the United States. Moreover, in building a successful state from the bottom up Venezuelans have defeated the neoliberal notion of socialism as purely utopian. It also brings an end to the fabrication ‘there is no alternative’. “We have a law which will go down in history. That history…tells us that the triumph of the people, of the workers’, has never come about without a long process of resistance, of struggle, suffering even. This law, which I had the honour of signing along with Chavez…is the product of a long process of struggle,” explained Carlos. This should be instructive to leaders of Britain’s labour movement who rightly embrace the revolutionary processes in Latin America, but are often embarrassingly conservative in campaigning for workers rights here in the UK.

At a time when Republicans and Democrats in the US and Labour and Tory politicians in the UK struggle in vain to find some differences, Chavez illuminated the political landscape with his vision of socialism for the 21st century. He proved that socialist policies do work and win popular support. He showed that defiance of US imperialism is possible and a vote winner. Although his death was not unexpected, his inimitable determination and character will be greatly missed all over the world.