Grenfell, Just Like Piper Alpha – A Failure of Deregulation 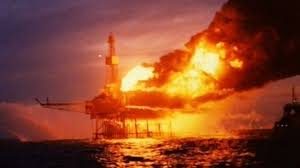 The horror of the Grenfell tower block fire recalls the Piper Alpha Oil platform fire in 1988 in which 167 oil workers died after a preventable gas explosion. This followed years of deregulation by the then Thatcher government and drastic cuts in maintenance and safety procedures by Occidental Petroleum when the oil price fell. The oil extraction platform had been adapted to extract gas and the living quarters were located next to pressure units against safety practice.

The gas explosion had tragic consequences, including the highest death toll ever in an oil platform and a £1 billion insurance pay-out, of which only £66 million (just 6.6%) was paid to the families of the workers who died in the fire. The subsequent investigation report had over 100 recommendations about improving safety in the North Sea. (Source: The Guardian July 4th 2013)

The Grenfell tower fire follows decades of policies by governments undermining council housing and cuts to Local Government, which reached an extreme logic at Kensington and Chelsea.  Following the Thatcher government’s ‘Right to Buy’ policy whereby council houses could be bought at discount prices the Blair government came up with the idea of creating housing organisations separate from councils. They made this re organisation a condition for the receipt of finance to repair and modernise council houses.

Kensington and Chelsea Tenants Management Organisation (KCTMO) is one of these ‘arms length’ organisations. It now manages 10,000 social houses and flats. The policy intentionally created a break in accountability between the elected councillors and tenants in council housing. It also resulted in organisations like KCTMO no longer having access to expertise from the council’s technical departments, which have since been greatly reduced in size and capacity. The KCTMO was therefore reliant on the private sector for the design and implementation of refurbishment schemes such as the over cladding which has turned out fatally flawed, as are many more around the country.

Some councils such as Sandwell did provide expertise to their arms length organisation and used private consultants and three contractors to implement a refurbishment programme for 40 blocks. As a result, the over cladding system used the non-flammable mineral fibre, ‘Rockwool,’ for the insulation layer and aluminium in the outer rain screen panels. The system also contains fire barriers in the cavities at each floor. But, an essential feature was that engineers and clerks of works regularly checked the installation on site.

Today, many local councils no longer have the technical expertise and resource capacity to properly control such schemes. Paradoxically this situation does not even benefit the private sector, as the lack of proper control means that there are shortcuts taken and good consultants and contractors are not given the opportunity to tender on a fair basis to implement safe quality schemes.

The inadequacies of Kensington and Chelsea Council were all too apparent in its lack of organisation in response to the emergency caused by the fire.  Under the Civil Contingencies Act 2004, councils, which are defined as category 1 responders, have a duty to have in place ‘Emergency Plans’ and arrangements to make information available to the public. Such plans name officers, operatives and organisations, who must make themselves available and act. Indeed, ‘Resilience officers’ should continuously update the plan and organise emergency exercises to test the plans, in cooperation with the police, Fire and Rescue Service and others. The plans list the evacuation centres, means of transport and arrangements with hotels which might accommodate people. Quite obviously no such plan went into action during or after the Grenfell fire and curiously this matter has not been questioned or highlighted by the media.

The aftermath of the Piper Alpha Oil Platform fire resulted in much greater safety in the North Sea oil industry, a great upsurge in trades union organisation among oil workers and public questioning of the Thatcher mantra of deregulation.

Out of respect for the victims of the Grenfell fire and the thousands of tenants now at risk throughout our country a major reversal of current policies on public housing and the role and resourcing of Local Government is now required.

Blood stained Biden, bandit in chief of the world's most vicious imperialist power, can smile as he gives moral and material support for the killing of Palestinian People.

I can't be polite or civil while he wishes Muslims well as he gives Israel the green light to butcher them in Palestine. Fuck off, pal. https://twitter.com/POTUS/status/1392961402160259085

Israelis carpet bomb Gaza, to kill people and flatten high rise buildings, so that should they launch a ground attack they can kill more people.

My interview earlier this morning with @trtworld providing military insights into why #Israel is razing high rise buildings in #Gaza. They fear a Grozny type situation should they decide to invade & engage in fighting in built-up areas with Palestinian groups. #GazaUnderAttack

Solidarity with the Palestinian People.
Free Palestine!
March for Palestine.

We will be marching to the Israeli Embassy on Saturday 15th May to demand an end to Israel's grave violations of human rights and international law.

SNP can form a government in Scotland, and with the collaboration of Greens push for a second referendum on independence. There is no option for those opposed to separatism, but to work together to maintain united Britain
All4Unity BetterTogether
https://www.google.com/amp/s/www.bbc.co.uk/news/uk-scotland-scotland-politics-57038039.amp