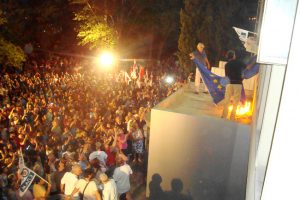 The closure of ERT, the Greek state broadcaster, led to the withdrawal from government of one of its coalition parties and to strikes and widespread protests. It has been presented as a money saving measure but is in fact an act of censorship by a corrupt government, tied to tax defrauding rich and foreign corporations, waiting to profit from asset striping through privatisation and land sales. Some key facts are worth noting:

The lack of protest at this flagrantly anti-democratic measure by the EU is not surprising as the government in Greece has agreed to impose its bailout programme.