Greece Referendum: Vote No for Dignity and Freedom 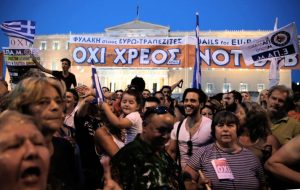 The ultimatum to the Greek government by the Troika (European Commission, European Central Bank and IMF) shows their intent to impose dictatorship and suppress dissent.

Those in support of the Troika include the leaders of governments who had previously accepted Troika conditions, regardless of their national interests. Government leaders in Italy, Spain, Ireland and Portugal now feel exposed in their betrayal, and fear growing internal dissent.

Most experts agree that the Troika proposals make no economic sense and would deepen recession and increase the debt and deficit, but the Troika cannot be seen to yield. They even hint that if Greeks vote yes to their proposals they would amend them. The reality for the Greek people is that the Troika caused their problems. 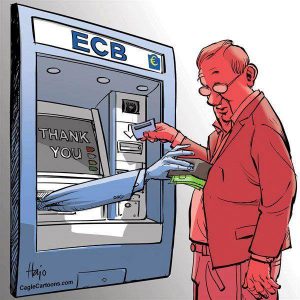 Ninety percent of the bailout money ‘received ‘ by the Greek government has mainly gone to German and French banks and only 10% was used for the Greek people. The debt that did exist in Greece was mainly in the private sector.

The ‘help’ from the EU was to ‘persuade’ the Greek government to take on that debt, which was then sold to the German and French banks as bonds. This way, the bankers, with the help of the Troika, could transfer the debt burden to the Greek state and ordinary citizens. With this leverage they could then apply the well-tried, neoliberal strategy of forcing privatisation, reducing pay, pensions and public services.

This strategy has been widely applied in Africa, Asia and Latin America and was now to be introduced in Europe. To ensure control the Troika had to get Greece into the Eurozone and therefore an elaborate accountancy fraud was required to show that Greece met the ‘Maastricht’ criteria.

Goldman Sachs was hired to produce the false report. Unfortunately for them the Papandreou government exposed the figures as shown below:

Papandreou also called for a plebiscite but the Troika organised his removal and replacement in 2011 by the right wing Samaras government.

Debt in Greece increased as the government borrowed at lower interest in the Eurozone to finance the Athens Olympics. The 2008 crisis caused by the US, UK and EU banks made the situation worse by increasing the debt and the leverage and demands of the Troika under the name of ‘austerity’.

Syriza was thus elected on its rejection of austerity while staying in the Eurozone. This position is economically contradictory but allowed politically (it is actually very difficult to expel a Eurozone member). Their stance that austerity is bad for the whole of Europe is correct, but their belief that the Troika could be persuaded into rationality by economic logic is at best naïve. 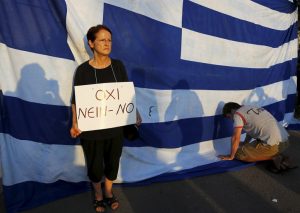 debt must be cancelled and repayments extended over 40 years to allow economic growth and repayment. The problem is not economic but political. The Troika is vulnerable and brittle, its power is being challenged and it sees suppression of dissent as paramount.

Freedom and dignity are at stake for the Greek people and to gain it they must vote NO this Sunday. They deserve solidarity from people throughout the world. For Britons the lesson is clear – we must vote NO to remaining in the EU.