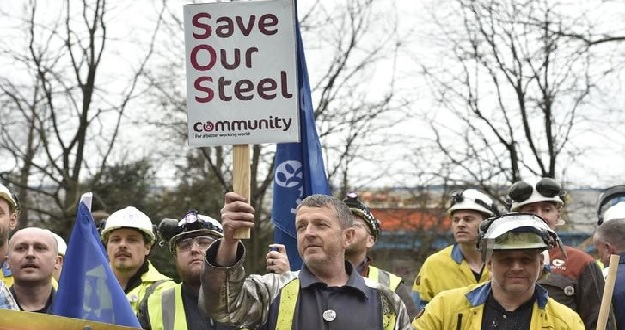 Britain’s autocratic government refuses to acknowledge the importance of core industries and infrastructure in Britain, which explains their disingenuous behaviour towards British workers and those in the steel industry in particular.

Our steel workers are highly skilled and produce some of the best steel in the world, never mind Europe. This strategic industry is, however, in foreign ownership, for them to do with as they please, while the government cries crocodile tears. Britain’s private industries were supposedly encouraged to buy British steel, but in reality they were importing a lot of EU steel made principally in Germany. At this late stage of the crisis government has belatedly suggested local councils and the public sector should buy British steel.

The Tories and previous governments have done nothing to support our steel industry and many of their actions have been positively damaging. They have been at the forefront of the EU in a fight against tariffs on importing foreign steel. The US has trade tariffs of over 200% on some of their products and China imposes its own 46% tariffs to protect vital industries. Annual Chinese steel exports to EU countries have increased from 1.3 million tons in 2009 to 7.7 million tons in 2015. High energy costs for the British steel industry, in comparison with other producers, have not helped. While Britain has cut production by 10%, Germany has only cut it by 1%. 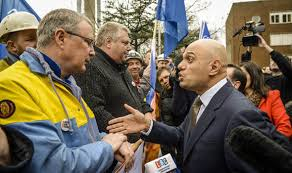 Tata Steel already produces steel in Germany and can easily divert production, as it has no further interest in its British operation or in finding a buyer. Germany would stop any government intervention to support British steel. Italy’s attempts to fund its industry were vetoed by the EU. But nationalisation is the only answer. China protects its industries, unlike Britain, where ministers and politicians are positively treacherous when it comes to ours. British ministers have long known that Tata intended to end steel production in Britain and did nothing to find a buyer.

Stephen Kinnock, local Labour MP for Port Talbot can justifiably call for Business Secretary Sajid Javid’s resignation, but Kinnock’s own stance does not bear scrutiny given he is a leading campaigner for Britain to remain in the EU. EU policy is to concentrate different industries in larger European regions, disregarding the needs of nation states. 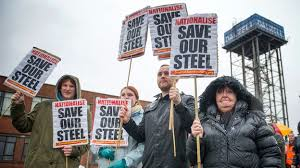 The government remains quiet about the continuity of the blast furnace at Port Talbot, crucial to the production process and also to the threat to the workers’ pension fund. If Gupta’s Liberty House corporation is given Tata steel what will the government offer them? Either way, the government and EU wash their hands of our strategic industry and workers are sold down the river. The EU offers nothing but low wages and unemployment.