The election of Jeremy Corbyn to the leadership of the Labour Party is a great opportunity for all those involved in progressive politics. It is an outstanding example of grass roots democracy, attracting young and old alike and demonstrating what can be built in a short time if people are inspired to take part. The extent of the victory, the manner of its accomplishment and the content and vision of the campaign are a big blow to neoliberalism.

The size of the victory is important. There was a 60% majority in the first ballot but also majorities in all voting sections. Also significant was the election of Sadiq Khan as the Labour Party candidate for London mayor and of Tom Watson as Labour’s deputy leader, both of whom received the support of the Trades Unions. It turned out that it was the Trade Unions who were in touch with the public mood and not the pundits or the Blairite prophets of doom.

The manner in which the victory was achieved showed that personal contact with the voters was key, with 35 hustings and 99 mass meetings all packed. Participation has characterized the Corbyn campaign as well as the use of Facebook and other social media, particularly among the young. The reactionary media was rendered useless.

The result is an indication of the change that has come over the British people. The Tories may be in power, but only a minority voted for them. The SNP and UKIP are dangerous parties that threaten the unity of Britain, but their populist programmes attracted millions of voters who saw were caught between a rock and a hard place.

British people are interested in politics, but are deeply cynical about politicians offering more of the same. Many, many Britons are sick of the status quo, the established Westminster parties, who only offer austerity, cronyism and fear. Hope, aspiration and security are denied to the majority of British people, as the rich get richer whilst the majority fall behind, or by the wayside.

Tories, Blairites and the like assume that it is neither possible nor desirable to challenge the dominance of either finance capital or NATO’s imperialism. All that is achievable in their version of democracy, is toned down Tory rhetoric. It is telling that calling for peace, jobs and less inequality was seen by Corbyn’s opponents as radical, old fashioned and unachievable.

Everyone wishes to have secure jobs, decent healthcare, an affordable home and a pension that keeps them out of poverty. At a time when millions of our people are crushed by unaffordable rents and lack of council housing, when social cleansing in London to benefit the rentiers and speculators is rife and the construction industry is in recession, reactionaries claim that a real plan for housing is obsolete old policy. This victory now opens up all these issues and more to real debate among the people, especially about the role of finance capital and the need for real jobs. The real nature of ‘austerity’ will be examined in detail, exposing the government policy of robbing the poor to give to the rich.

Britons want to live in peace in the world, free from the fear of terrorism and conflict. The establishment created the migrant problem, but now they blame the migrants. Their answer is to bomb Syria, as if that will solve the problem. A demand to end the war on Syria and defeat ISIS and Al-Nustra through a regional conference which includes the Syrian government, Russia, Iran and China and all the regional countries is not seen as an essential strategy to help refugees fleeing into Europe. To the reactionaries it would be a dangerous foreign policy step as it does not defer to the US, Israel and Saudi-Arabia. 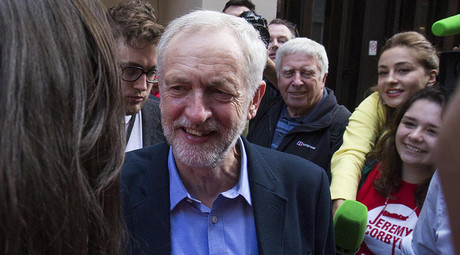 The election of Jeremy Corbyn will not solve all the issues but it is a start. It will enable a renewed movement to be built, to attract the disillusioned, first time voters, young, old, trade unionists, workers, women and men. We need to mobilise, to challenge austerity and the European Union and to build a free, independent and prosperous Britain. Opposition to the EU will be a test of the people’s opposition to austerity.

The battle to win the British people to a new progressive vision for which they are willing to vote and fight for is far from won but this victory shows such a prize is achievable.A light has been lit.