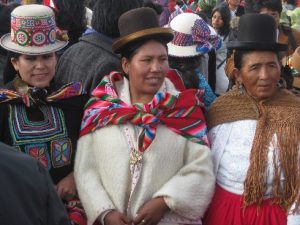 One of the many achievements of women world-wide, which was celebrated on International Women’s Day this year is that of the women of Bolivia who now hold more than half the seats in their countries newly elected legislative assembly. They won 53.1% in the lower house and 47.2% in the Senate giving 50.15% overall. This places Bolivia second in the world rankings for women’s representation after Rwanda, which has 51.15%. In the UK women hold only 22.8% of seats in the Commons and 24.16 in the Lords. Also all of the three parties in the Bolivian assembly are led by women in the lower house and men in the Senate.

The election, which returned President Evo Morales Ayma and Vice President Alvaro Garcia Linera with 61.4% of the vote for their party MAS (Movement Towards Socialism), had a turnout of 95%. At least half of the candidates selected by each party had to be women because of the new constitution adopted by the previous assembly. This Constitution was the result of political and economic struggle by the Bolivian people, which resulted in the inclusion of the indigenous majority in the political life of the country.

The indigenous culture has 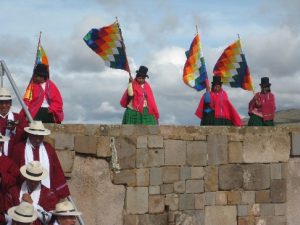 the concept of balance between men and women. This was demonstrated in the past by the important role women played in the struggle against the Spanish colonists, including that of Bartolina Sisa and Juana Azurduy who led armies.

More recently the trade union “Bartolina Sisa National Confederation of Farm Workers, Indigenous and Native Women of Bolivia” which has the largest membership in the country, has played a prominent role in the struggle for equality.

For further information please contact Manuel Bueno on 07786 027564 or tradeunionfriendsofbolivia@gmail.com. Manuel was born in Bolivia and is a founding member of Trade Union Friends of Bolivia.