Anti-EU voters in council and European parliament elections have beaten establishment parties in most of Europe and won elections on anti-EU platforms from the right and left. While in the UK, France, Holland and Denmark right of centre parties won conclusively, in Greece, Spain and Ireland the victories were for left of centre parties and all the victors held anti-EU positions. 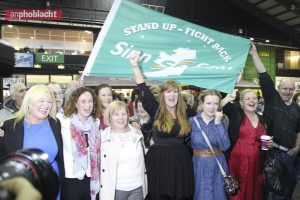 A common position of Eurosceptic parties has been opposition to the undemocratic nature of the EU. Most oppose the ‘free movement of labour’ although the emphasis differs. Sinn Fein, for example, campaigns strongly against the migration of Irish workers due to mass unemployment. All except UKIP oppose austerity and its consequences: mass unemployment particularly amongst the youth, public service pension and benefit cuts, more taxes for workers but not corporations or banks and cuts in investment.

The most coherent anti-austerity fight has been by Sinn Fein in Ireland. They have consistently opposed the bailout of the speculative Irish banks with public funds by Fianna Fail, which followed orders from the EU to protect the bond holders, or ‘the golden ring’.

This policy was continued by the next government, Fianna Gail and Labour, which resulted in massive public debt (120% of GDP). Sinn Fein have now proposed an anti-austerity programme for Ireland and the EU. It includes:

They Say They Are Listening

In the UK politicians say they are now listening. If so we must demand through our unions and community groups: